With a lot of discussion hovering around the number of years of updates Android phones provide when pitched against the iPhone, and OEMs trying to one up each other in that regard, you might wonder what the fuss is all about. You might also think why your device’s software even needs to be tweaked when everything’s already running perfectly fine.

Thing is, aside from all those user-facing snazzy interface changes, updates also introduce plenty of under-the-hood optimisations. These include performance improvements, and more importantly – security and privacy updates. Let’s start by taking a look at the things you miss out on when you stick to an older version of Android or if your phone reaches the end of its software support life.

Why update your Android phone

One of the most common ways for malicious apps to gain access to your private data is through permissions, which, ironically, are mostly granted by users themselves. Until Android 10, apps were given lifetime access to things like the mic or the internal storage after user consent.

Android 11 changed this by introducing an “Only this time” permission in the permissions dialogue. If the user selects this option, the app is granted temporary one-time permission. Android 12 further enforced privacy by introducing dedicated privacy indicators for when an app accesses your mic and camera. Then, Android 13 expanded upon this with built-in controls to stop apps from using Wi-Fi permissions to collect your location data.

You can see what we are trying to get at here. The older your Android version is, the more important security features you miss out on. But it doesn’t end there. The Android system isn’t infallible, just like any other OS, and bad actors often find new vulnerabilities to exploit when older ones are patched. It’s really a cat-and-mouse game where Google plugs exploitable vulnerabilities, bad actors find their way around them, and Google patches things up again. These patches are rolled out through monthly security updates, making such updates just as important as full-fledged Android version upgrades.

Android 12 saw some of the most notable performance improvements to the platform in a long time, with Google claiming it “reduced the CPU time needed for core system services by 22%.” This helps apps launch faster and the system run smoother. Obviously, some Android versions bring more significant performance enhancement than others. But the one thing you can be certain of is that there’s rarely any regression – unless of course if the OEM messes things up on their end, which sadly is often seen on budget phones. Still, the advantages usually outweigh the disadvantages.

While “if it ain’t broke, don’t fix it” is mostly a well-grounded saying, many Android users will actually disagree with it when it comes to the OS. Google likes making frequent changes to the Android interface and they are great at instilling a sense of newness when things go stale. For example, Android 12’s brand new Material You design, which switches system and app colours based on the current wallpaper, was received quite well by users. 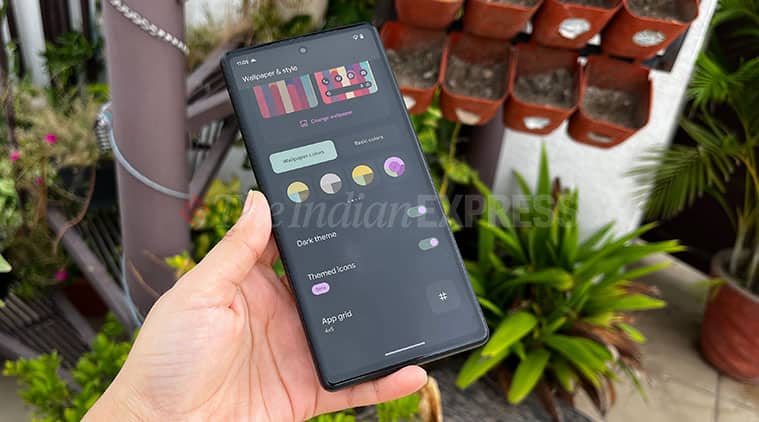 Android 12/13 extracts colours from the wallpaper and presents them to the user to apply (Image credit: Shruti Dhapola/Indian Express)

How to update your Android phone

If your current Android phone was released in the past two to three years then there’s a good chance it’s well within its software support life. Gone are the days when Android phones were treated to just a couple of updates at best – OEMs like Samsung are now closing in on Apple by promising up to 5 years of security updates and 4 Android system updates. Still, even if you reckon your phone has hit the end of the road, there’s no harm in checking. Just make sure your phone’s connected to the Wi-Fi and has sufficient battery before updating.

How to update your Samsung phone

Often regarded as the kings of Android updates and often beating Google at its own game, Samsung devices have different update methods based on the model and One UI version:

Normally, you will receive notifications whenever there’s a new update available (be it any device), but you can check manually if you suspect your phone’s not on the latest version.

How to update your Xiaomi phone

Xiaomi has started promising up to 3 years of Android updates and 4 years of security updates for some of its newer phones. You can check for the latest available MIUI version by navigating to:

Xiaomi is yet to announce its Android 13-based MIUI skin

Xiaomi also offers the option to download and install updates automatically. On the update page you just opened, tap the three-dot menu at the top-right corner, hit Settings, and turn on ‘Download automatically’ and ‘Install automatically’ options.

How to update your OnePlus phone

OnePlus is currently rolling out the slightly controversial OxygenOS 13 for eligible devices. You can check for the latest software version by heading over to:

How to update your Oppo and Vivo phone

To check if there’s a ColorOS/FuntouchOS system update available for your device, go to:

How to update your Realme phone

On Realme UI 3.0, you need to head to Settings > About device, then click ‘Up to date.’

How to update your Motorola phone

Open the Settings app, scroll down to the bottom, tap ‘System updates,’ and then tap ‘Check for updates.’

Motorola also gives users the option to sit back and relax and let the device handle updates on its own. For that, head to Settings, scroll down to the bottom, tap ‘System updates,’ and toggle ‘Smart updates.’